NOTHING REMARKABLE HAPPENS IN OUR COMFORT ZONE – INTERVIEW WITH ANNABEL VINE, WRITER AND DIRECTOR

We interview Annabel Vine as she finalises her fourth short film Granbad .  A film in which a dyslexic boy inadvertently shows a bully that it isn’t ‘soppy’ to love your Grandad and like spending time with him.  Annabel has worked with a fantastic production team and cast to bring us something unique but now needs to crowdfund to get the much need funds to pay her team.

What was your drive behind making films?  In particular
Granbad?

I made my first film at 17, as part of a media course I took at my local college.  None of the other students would turn up, so I had the teacher and studio all to myself.   I am dyslexic, with a passion for storytelling, and I immediately loved the fluidity of being able to communicate a message with images rather than written words.  The process of stringing the story together in the edit fascinated me. It still does.

I felt humiliated by my Dyslexia when I was young. One of my primary school teachers would regularly bully and shame me, so I would try to hide it.  Adults can deeply affect a child’s confidence, the words that adults choose to use around children create that child’s inner wiring.  After years of feeling bullied by that teacher, my self-confidence hit an all-time low before I was finally moved out of her class.  My new teacher, Miss Brooks, read something I wrote and decided that despite the terrible spelling and scratchy handwriting it was an accomplished story.  Being told I was good at something was all I needed, and I have never looked back.  I am now a professional screenplay writer, which feels miraculous to say the least.

What roadblocks did you face when you were starting out?

The main roadblocks have been to do with my own maturity.  It took me ages to find the confidence to take myself seriously as a writer/director.  There is a lot of truth in the saying “you got to see it to be it” and there were so few women directors when I was graduating that I didn’t think that was an option for me, so I went into editing.  I still feel very much at the beginning, I have a feature film in active development, and have made hundreds of films including shorts, music videos, commercials, promos, documentaries, but my commitment towards narrative fiction feels exciting and fresh which is strange as at film school it was all I was interested in.  Taking a film from script to screen is difficult, you have be committed, tenacious, determined and willing to work your fingers to the bone and even then, it might not happen. There are endless roadblocks to everyone in this industry trying to get films off the ground.  Bad films are as difficult to make as good ones.  So, make sure the script is good before you begin.  I learned that the hard way.

What is your greatest achievement to date?

Being a mum is definitely my greatest achievement.  It was not something that came naturally to me.  I always say that my first son Wilf taught me how to be a mum, before he arrived I knew nothing.  Children teach you selflessness and perseverance. I was a chaotic but fun mum.  I could never understand how other mums made everything so neat and always had a tissue in their pocket.   Once when my second son Angus was 7 I got the ironing board out, it must have been a wedding or some smart occasion, and Angus sat on the bed baffled…..”What’s that?” he asked. He had never seen an ironing board before.  Being a mum was a very exhausting, penniless and yet inspiring time for me.  I remember having all these ideas for films, but not having any time or money to realise them. One summer my friend Louise Middleton (an equally chaotic and crazy mother of twins) and I decided to spend the holidays making a film with all our children in it, it is called Spider Island.  It’s a totally bonkers and ambitious action movie with all our children dressed up as ninjas, driving monster trucks and fighting each other.  It won Best Film at the Cornwall Film Festivals in the Kids category.  It marks the beginning of me rekindling my passion for telling stories with film.   I quickly realised that if I wanted to fulfil my filmmaking ambitions I had to find a way to do it with kids, no one was ever going to hand me chunks of time or money and say, ‘off you go love’, so I had to carve out that time.  I am not interested in clothes or smart cars.  If I ever got any money it went on buying me time and equipment to make films.

Can you tell us about a funny anecdote regarding the crew that you worked with on
Granbad?

There is a scene in Granbad where our young lad must spray graffiti on the wall and it spells out GRANBAD instead of GRANDAD.  We always knew this scene would be tricky as it involved a very live situation, an 11-year-old boy spraying paint on a wall.  We knew we had very little time for a re-take if he or the crew got it wrong.  Well, everything that could go wrong in this scene did go wrong.  He began to spray paint on the wall when he was supposed to be faking it, which meant trying to wash that off and going again.  Then when he was meant to spray the word he spelled out GRANDAB instead of GRANBAD.  Although we had rehearsed the spraying many times, in the pressure of the moment and the flow of the scene he got it wrong, something I totally relate to.  The title of the film and the story pivot on this scene and while we were rolling you can hear me and the art department begin to make noises off camera.   We had to think quickly on our feet.  You will notice that in many of the shots the words he is writing are obscured by another actor’s arm or something.  Film crews love solving problems, they are good at it, so this set back actually really focused us all and gave us a shot of the arm, we pulled together and I got the scene.  When we came to edit it, I was so excited to see how it might cut together. Phew, we got away with it, just.

Can you tell us about the greatest moment in your film career?

Shooting the final shot of LETTERBOX, which we shot guerrilla style without permission at Glastonbury, is my most exhilarating film career memory. I had smuggled the entire cast and crew into the festival.  We had been shooting all weekend, the festival as the backdrop, a film set no indie film maker could ever afford to build.  By Monday morning the film is in the can – except for one last shot, that of Imani being dropped off at the start of the festival. Our van is packed up and we head for the exit. It’s now or never. Yasmin the actress dons the niqab for the last time, we put the camera on the ground and get the truck to drive over it, the undercarriage revealing her, isolated beside a load of brightly painted bins. A huge lorry appears behind her and adds a sense of impending doom to the scene. I jokingly hold up an imaginary walkie-talkie, pretending that I have a budget, and extended crew. “Krrkkk krrkkk… cue lorry.” We all roll over laughing, exhausted and exhilarated. We have a film. We got away with it: a crazy idea immortalised, and a huge amount of fun had.  That zero budget film went to 14 film festivals in 9 different countries, won 9 awards and got 6 nominations at international film festivals including BAFTA qualifiers.   Here is some press we got for it at the time http://civilianglobal.com/arts/guerrilla-shooting-at-glastonbury/

Which filmmaker has influenced you the most?

This is a tough one as there are so many and new ones being added to my list all the time but if I had to name just one it would be Martin Scorsese.  I have consistently loved and been informed by his work.  He is not tied down to a genre, he is brave and experimental, never stuck in a rut or formulaic.  Taxi Driver slapped me in the face when I first saw it.  So gritty, such a well-articulated atmosphere, and the shots just speak volumes without words.  I love his films like ‘The Last Temptation of Christ’, ‘Kundun’ and most recently ‘Silence’ which deal with the mystery of life and our relationship to our higher selves. He is also an aficionado at the commercial stuff like “Wolf of Wall Street’ and ‘The Departed’.  He makes great documentaries too.  He is a living legend and I revisit his work often.

Which book would you love to make a film out of one day?

Jitterbug Perfume by Tom Robbins, but it would be virtually impossible as it begins in the forests of ancient Bohemia and doesn’t conclude until nine o’clock tonight (Paris time).  It has a huge exotic cast, (expensive) set in various time periods (expensive) and is utterly preoccupied with reincarnation which creates a big confusing protagonist problem.  It would need to be a long-running, huge budget, TV series with a brilliantly crafted screenplay.  It’s impossible, but I like a challenge so bring it on.

If you got the opportunity to remake a classic, which one would you go for?

Calamity Jane, not as a musical, she would be a Native American sympathizer, and at the end, she would come out as a lesbian and settle down with the prettiest woman in town.  They would have to defend their sexuality with guns.  They would smoke fat cigars and cook on open fires.  I quite fancy making a western.

What was the most important lesson you had to learn that has had a positive effect on your film?

The most important thing that I have learned is to make myself uncomfortable and then see where I end up.  Feel the fear and do it anyway.  Nothing remarkable happens in our comfort zone.

Finally, we get noticed because of our successes – but we create them on the back of our failures. We learn best from the experiences where it doesn’t work. And yet we still only discuss the success, not the failure. What failures of your own have you been able to learn from?

Rejection is a massive part of this industry.  So, learning to love my thick skin has been essential.  I have learned a lot from writing crap scripts that I enthusiastically jump into before doing enough research or prep.  I end up with this huge meandering document that has the odd gem in it but finding that gem becomes impossible.  I now know that for me writing like that is a waste of time and time is precious.  I have drafts of things I would be mortified if anyone read now, but I keep them for the hidden gems, but I would need to be Indiana Jones to find them.

If you’d like to find out more about Annabel and Granbad please take a look here. 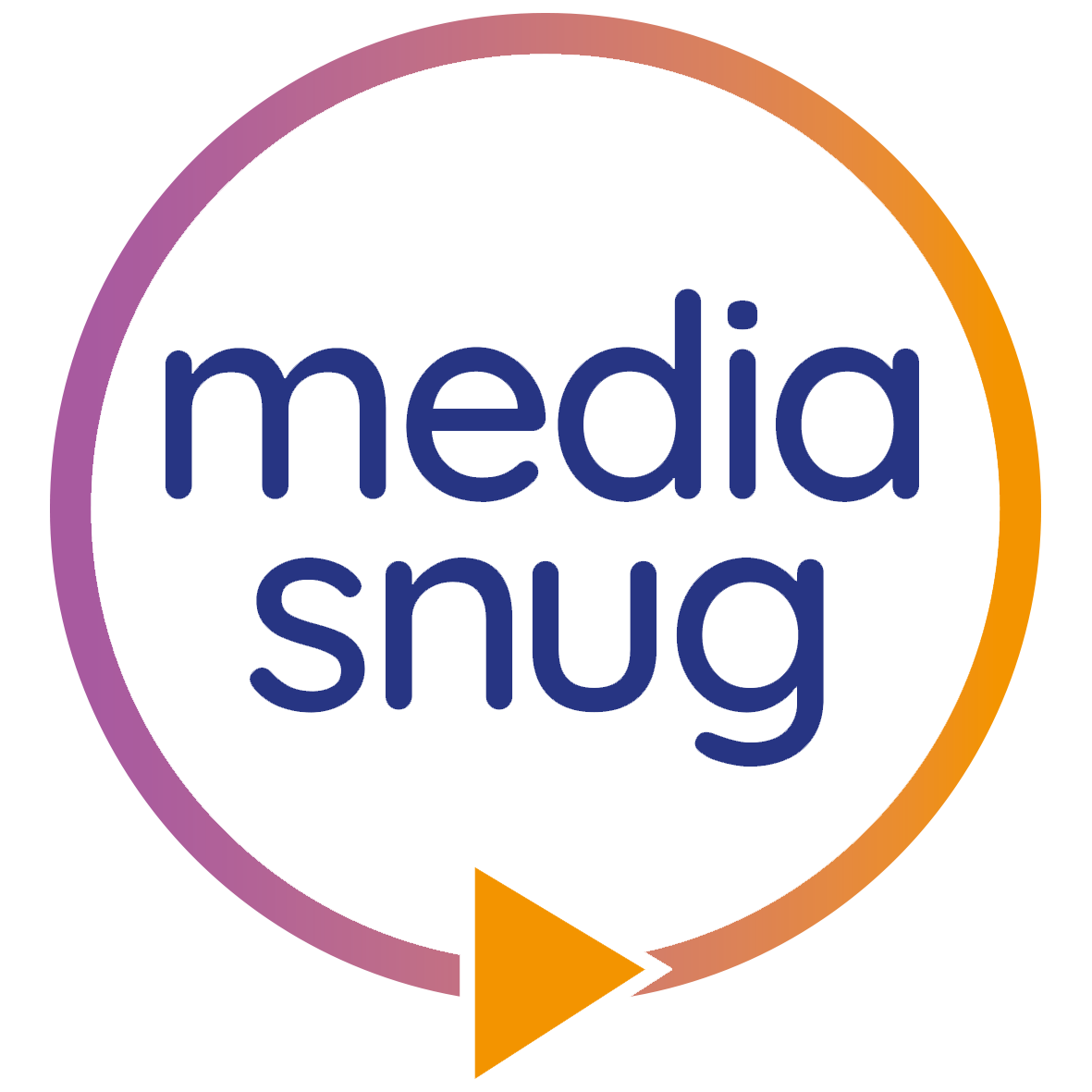 Need Help? Chat with us
Start a Conversation
Hi! Click one of our members below to chat on Whatsapp
The team typically replies in a few minutes.
The Media Snug
The Media Snug
We will be back in 2:27